It’s the year 2140. Earth’s sky is darkened by a strange red haze. Wrecked cars block intersections of streets strewn with trash in a lifeless town. A massive whale carcass, bruised with rot, lays on a beach littered with plastic.

This eerie dystopia is the creation of USC School of Cinematic Arts students Michelle Olson and Aimee Zhang and the Environmental Studies program at USC Dornsife College of Letters, Arts and Sciences. Their video game, Plasticity, lets the player turn this bleak world from ruin to budding paradise through a series of interactive choices.

Karla Heidelberg, professor of biological sciences and environmental studies at USC Dornsife, who acted as a consultant on the game along with a team of the department’s students, thinks that scientists can sometimes forget to make science relatable to a wide audience.

“By making an interactive game that taps into emotional experiences, it helps to connect players around important issues related to the environment and sustainability,” she says.

Both Zhang and Olson believe video games can help people empathize with ecological threats so that they take real-world action.

“When we throw garbage away, we don’t see where it goes or who it affects. Or, when we decide to recycle or reduce plastic consumption we don’t see how that makes an impact. But, when you play a video game, you can feel the impact of the choices you make in real time,” says Zhang. 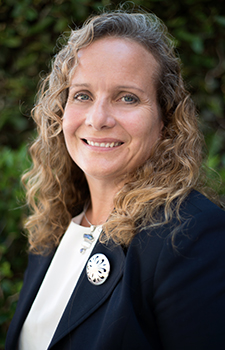 From personal experience, Olson knows that gaming can spark change. She has the “triforce” symbol worn by the character Link, from the Nintendo game The Legend of Zelda, tattooed on her left wrist.

“When I played this game, the character that I was embodying was so kind and noble and courageous. I felt so empowered being this character and making the same choices that they were making, that I felt like I should try to embody these values in my real life too,” she said.

Zhang and Olson met in an “Intermediate Game Design” class at the School of Cinematic Arts and bonded over a shared concern for the environment, especially the problem of plastic pollution. Together, they watched the 2018 documentary A Plastic Ocean, which highlights the extensive damage single-use plastics cause to the environment.

Earth’s oceans take on 8 million tons of plastic waste each year, floating in vast islands the size of Texas and killing wildlife. Microplastics have landed on pristine, snow-capped mountaintops, blown in by the wind. We’re even eating it, as miniscule plastic shards, called microplastics, wedge their way into the food chain.

“We were very troubled by the plastic problem and we felt a little bit powerless,” says Olson. “We were just game makers, what could we do about it? Aimee said, ‘Well, why don’t we make a game about it. Why don’t we try to communicate our feelings about this issue?’”

For their initial class project, the two developed Disposable, an early prototype centered on plastic waste. Zhang then pitched the concept of Plasticity for their senior capstone, a year-long endeavor where a team of student artists, composers and writers would collaborate with them to bring their game to life. With the project approved, Olson signed on as lead designer.

From the start, the two knew they wanted a game tied to real-world science. So, they reached out to Heidelberg for her expertise. A fruitful collaboration between genuine science and game design, two disciplines often at odds, began. 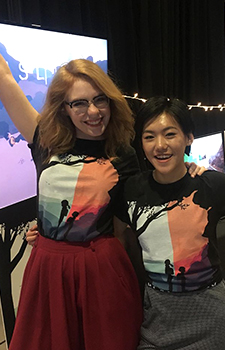 Using Heidelberg’s input, Olson and Zhang designed a game world partially submerged in water. Scientists predict sea levels may rise substantially over the coming decades, so they wanted this accurately reflected. Trash from plastic fishing nets features prominently as it’s a leading cause of oceanic pollution.

“Karla was extremely helpful in world-building. Talking with her helped us find imagery that grounded the game,” says Zhang.

Once the game was in pilot stage, students enrolled in Heidelberg’s classes could get extra credit for providing feedback. Groups of students played the game each week as beta testers.

“Students provided insightful tips about the scientific side of things that appear in the game, like red tide and algae blooms,” says Heidelberg.

Heidelberg said the relationship with Zhang and Olson was symbiotic. “Working with this team helped me learn to define science in ways that would be engaging and relevant to students coming from different educational backgrounds.”

It isn’t just science that inspired the two designers but creative mediums that explore serious emotions. Olson points to the 1984 Japanese animation Nausicaa of the Valley of the Wind, in which a young girl struggles to bring peace to a post-apocalyptic, environmentally toxic jungle (along with the help of some insect friends).

Olson says, “It communicated a really strong environmental message where the villain wasn’t a person or an entity, it was a societal problem. Even though they didn’t focus on hard facts and had a fictional setting, they did tremendous work in getting people to think and care about the environment.”

Zhang cites the games What Remains of Edith Finch and That Dragon, Cancer, which both tackle death and grief, as inspiration for how video games can provoke deep emotional responses. They don’t find the somber subject matter potentially off-putting to consumers either (which could be an obstacle when attempting to address similarly tough subject matter like environmental destruction).

“Why do people watch sad movies?” they ask. “Video games can also be a cathartic experience.”

To E3 and beyond

Plasticity enjoyed considerable success after its launch in May of 2019. It made an appearance at E3, one of the world’s largest games showcases, and at IndieCade. It’s garnered write-ups in Forbes and the Los Angeles Times. It’s also made a debut at an elementary school, which Heidelberg thinks is the perfect home for the project. 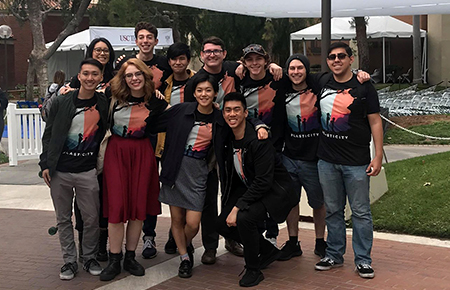 The Plasticity team, made up of students from the USC School of Cinematic Arts. (Photo: Courtesy of Aimee Zhang.)

“Because it’s a game,” she says, “young players will learn important concepts without necessarily feeling like they are being taught. This is a great complementary approach to more formal teaching models.”

All three believe that video games are uniquely suited to inspiring a personal response to environmental causes.

“What’s really special about interactive mediums is that you make a choice in the game and you get that direct feedback of how your choice impacted the environment,” Olson says. “If you litter in real life, you may never see the bird that eats that and dies, right? But in this game and other forms of interactivity, they make use of the consequences of choice in order to make it feel like players’ actions are impactful.”

They would all jump at the chance to work on a game that tackled another societal challenge. Olson wants to make one centered on animal agriculture’s impact on the environment. Zhang, citing an especially compelling USC Dornsife psychology class they took, would like to address the opioid crisis.

Heidelberg cares less about the subject matter and more about the participants. “I think educational partnerships like these have to be student initiated and developed to ensure the passion for the topic is high. If I could work with a student team like this again, I would do it in a minute.”