If you’ve ever deep-fried a fish or crisped up a batch of homemade potato chips, you’ve probably eyed the leftover vegetable oil as nothing more than a messy inconvenience.

Travis Williams, a chemistry professor at the USC Dornsife College of Letters, Arts and Sciences, sees something else: an ingredient for cheaper, cleaner fuels that can transform the energy sector.

Williams and postdoctoral scholar Zhiyao Lu have been reinventing the way biodiesel is made from vegetable oil. The process they developed at USC’s Loker Hydrocarbon Research Institute not only recycles cooking oil otherwise destined for the landfill. It also makes the biodiesel manufacturing process profitable, solving a problem that has plagued the industry for decades. 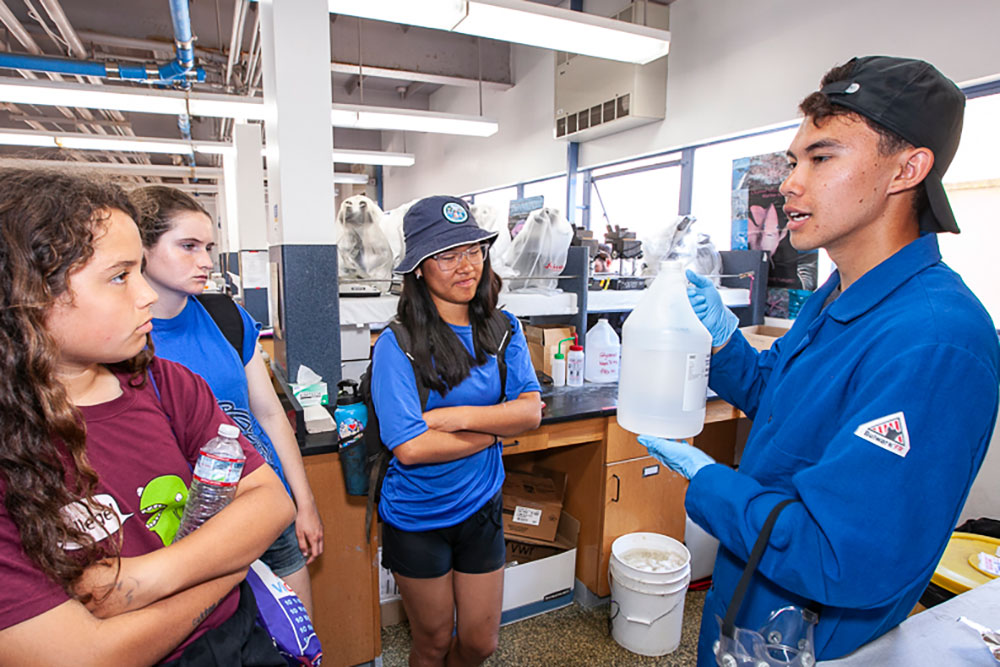 Professor Travis Williams and postdoctoral scholar Zhiyao Lu have been reinventing the way biodiesel is made from vegetable oil. (USC Photo/Maurice Roper)

Williams is one of several USC researchers harnessing the energy stored in plants to create next-generation transportation fuels. Whether they’re developing alternative crops or taking to the ocean to grow kelp, Trojan scientists are at the forefront of research into biofuels — a key component of a sustainable future.

Unlike fossil fuels, which form deep below the earth’s surface over hundreds of millions of years, biofuels are a renewable energy source that can be produced as quickly as plants can be grown, harvested and processed in a refinery.

According to the U.S. Energy Information Administration, biofuels — which include ethanol, biodiesel and biojet fuel — burn cleaner than their petroleum-based counterparts and may help reduce our dependence on foreign oil. The industry faces challenges, though. One is the need to make production economically viable without heavy government subsidies. Another is to produce biofuels from crops that wouldn’t otherwise feed people and on land that isn’t needed to grow food.

With affordability and sustainability in mind, Lu and Williams turned their attention to the production of biodiesel, a greener alternative to conventional diesel that can be used to power trucks, planes and heavy equipment.

While soybeans — typically raised to feed people and livestock — are the biggest source of oils for the biodiesel industry, the energy needed to grow them, extract their oils and make fuel is costly. Using waste cooking oils from commercial kitchens reduces the cost, but not enough to make production pay off. 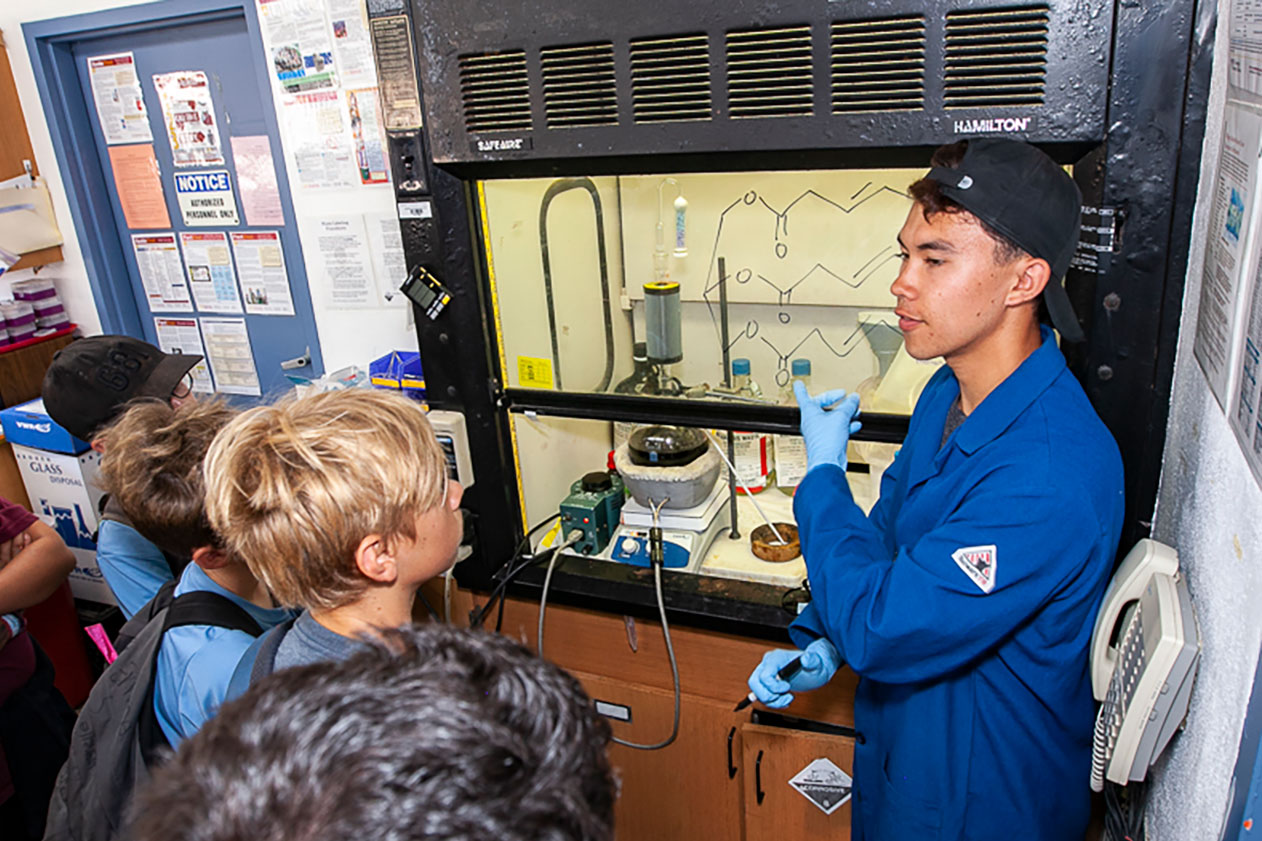 To get around that, Williams and Lu focused on a chemical called glycerol, a byproduct of the manufacturing process they believed could be transformed into something more useful.

“Scientists have been trying to figure out how to make biodiesel production profitable for many years, but glycerol has been largely overlooked because of its low market value. I knew, if we could find value in glycerol, we could overcome the economic obstacles as well as reduce waste in the manufacturing process,” Williams said.

Lu found that value by designing a molecular machine, or catalyst, that transforms glycerol into sodium lactate, a chemical used widely in the food processing industry to clean animal carcasses.

Lu and Williams licensed the technology from USC’s Stevens Center for Innovation and launched a company called Catapower Inc. Its business model earned them first place and $7,000 in the 2018 USC Wrigley Sustainability Prize competition, which supports environmental ideas with market potential from within the USC community. That win led them to the National Science Foundation’s Innovation Corps program, a two-month business incubator that paved the way for a commercial biofuel plant that will open in 2024.

Williams and Lu aren’t the only USC researchers working to transform the nation’s energy landscape through biofuels. 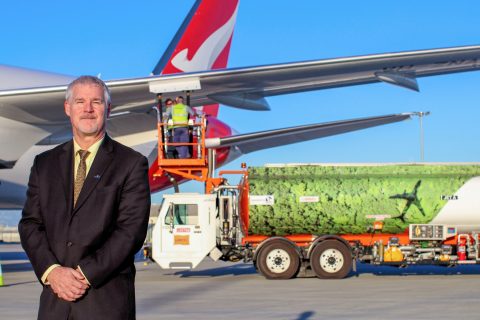 Alumnus Steven Fabijanski is the founder of Agrisoma, a company that develops and commercializes carinata seeds for the biojet fuel industry. Carinata — a leafy plant in the mustard family — flourishes in places where typical food crops won’t grow or can be grown in a beneficial rotation with food crops. Once harvested, oil from carinata seeds is refined into biojet fuel for the commercial aviation industry, while the byproduct is used as a high protein animal feed.

Biojet fuel produced from carinata seed oil has already powered two transoceanic flights and is being introduced into commercial fuel supplies in France and Germany.

Another Trojan — Diane Kim, director of undergraduate programs and associate director of special projects at the USC Wrigley Institute for Environmental Studies — is tapping into the potential of kelp, a type of giant seaweed.

Kelp is an ideal raw material for biofuel production because it requires minimal natural resources and doesn’t compete for land or fresh water with food crops like corn or soybeans. It’s also among the world’s fastest-growing organisms, reaching lengths of 100 to 150 feet and earning it the title “the sequoia of the sea.”

While kelp forests thrive along California’s shorelines, USC researchers are developing a method to grow kelp on a much larger scale — think of a kelp farm as big as Utah — in the open ocean. But sunlight and nutrients that seasonally coexist at the shoreline are separated in the open ocean, with light at the surface and nutrients at depth, creating a challenge for the research team.

Diane Kim works on a system to maximize kelp growth, with funding from the U.S Department of Energy. (Video/Maurice Roper)

With funding from the U.S. Department of Energy, Kim and her colleagues are working with an industry partner, Marine BioEnergy, to test a cultivation strategy using an experimental platform they’ve dubbed the “kelp elevator.” The project is part of the Advanced Research Projects Agency on Energy’s Macroalgae Research Inspiring Novel Energy Resources (MARINER) program, which was created to advance U.S. marine biomass production.

Using a solar-powered buoy and underwater tetrahedron structure, the kelp elevator cycles kelp up and down, bringing it to the surface to absorb light during the day and plunging it to deeper depths to absorb nutrients during the night.

“After a couple of years of prepping for the ocean trials, we just completed our first 110-day experiment at sea and have some exciting results. To put it simply, the depth-cycling strategy works,” Kim said. “We saw faster growth and maturation rates on kelp that were cycled compared to individuals growing near a natural kelp bed. Overall, the kelp on the elevator produced four times more biomass than the control.”

As the USC team continues experiments designed to maximize yield, Marine BioEnergy is working with marine engineers to develop open ocean farms, which will be unanchored matrices moved continuously through the water by autonomous drones.

Kim said the system could eventually be scaled up to meet the fuel needs of the entire U.S. transportation sector at costs that are competitive with the fossil fuel industry.

“We’re incredibly fortunate to be able to do this work at USC, where we have all the resources of the USC Wrigley Center and USC dive program,” she said. “We could not do this work without them.”